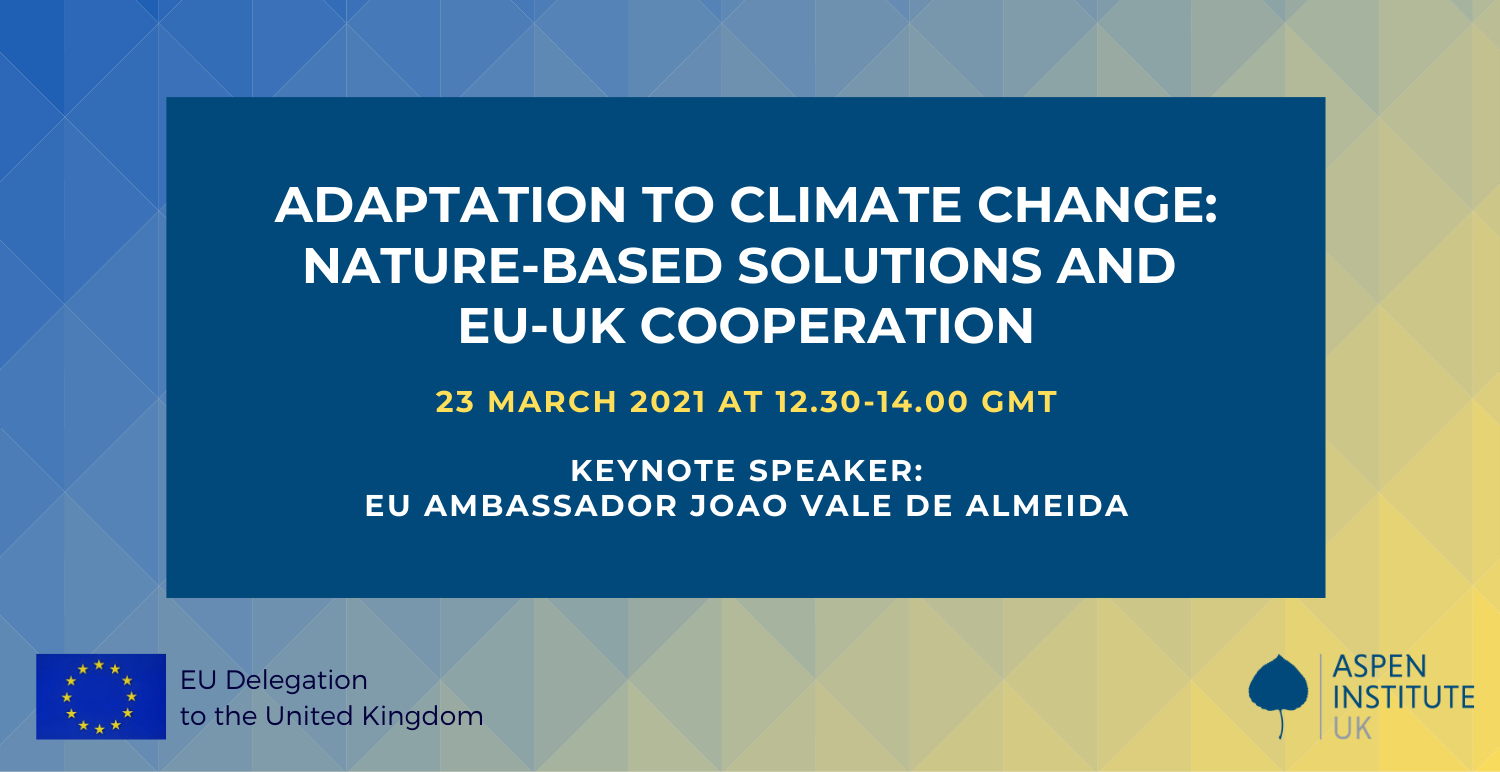 EU Delegation to the UK

Join the EU Delegation to the UK for this special event, to explore avenues for cooperation between EU and UK on climate change, and examine the role of nature-based solutions for climate resilience.

From devastating floods, to large forest fires and erratic weather patterns – more and more communities face the concrete effects of climate change. International cooperation is essential to mounting an ambitious and successful response to the climate crisis, and both the EU and the UK acknowledge this in their strategies for adaptation to climate change.

With a keynote address from Ambassador João Vale de Almeida – EU Ambassador to the UK.

Fiona Harvey – Fiona Harvey is an award-winning journalist who has covered the environment since 2004, at the Financial Times and subsequently for the Guardian newspaper. She has written extensively on every environmental issue, from air pollution and biodiversity to ocean plastic and climate change. Her assignments have taken her as far afield as the Arctic and the Amazon, and she has attended almost every UNFCCC Cop since 2004, including reporting live from the 2015 Paris conference. Among numerous awards and recognitions, she has twice won the Foreign Press Association award for Environment Story of the Year, the British Environment and Media Awards journalist of the year, and in 2020 she was named in the Woman’s Hour Power List of 30 top UK women, focusing on Our Planet.

Manish Bapna – Manish is the executive vice president and managing director of the World Resources Institute, a global research organization that works to address the urgent sustainability challenges related to food, forests, water, climate, energy, cities and the ocean. Manish oversees WRI’s programs, chairs WRI’s management team and works to strengthen the impact of WRI research. He led WRI’s efforts to establish offices in China, India and Brazil and helped launch WRI programs on cities, energy, finance and adaptation. Previously, he was the Executive Director of the nonprofit Bank Information Center and a Senior Economist at the World Bank. He also was a strategy consultant at McKinsey & Company.

Dr David Chandler – Dave is the Science Programme Manager at Moors for the Future Partnership. The Partnership works on the upland peat of the South Pennines in England, restoring the degraded landscape, engaging with local communities, and evidencing the benefits of restoration. Dave leads a programme of research and monitoring activities which focus primarily on the ecological and hydrological outcomes of restoration, and how those benefit the environment, local communities, and wider stakeholders. This work is done in collaboration with a wide range of partners including local authorities, government departments, charities, private water companies, local landowners, and Universities.

Clara de la Torre – Since 1 September 2019, Clara has held the post of Deputy Director General in the Directorate-General for Climate Action of the European Commission. Previously, she was Director for Transport in the Directorate-General for Research & Innovation. From 2014 to 2016, she was responsible for Key Enabling Technologies, following a 3-year appointment as Director in the field of Research and Innovation. In her first post as a Director, from 2008 to 2010, she was in charge of inter-institutional and legal matters related to the Framework Programme at the European Commission, which she joined in 1987 after some years in the private sector.

Dr Cécile Girardin – Cécile is Technical Director of the Nature-based Solutions Initiative, Oxford Martin School, University of Oxford. She combines years of experience in climate change policy analysis with a background in tropical ecology and thorough understanding of forest ecosystem functioning, providing a unique multidisciplinary approach to my work. As an environmental consultant, she has developed strong skills in policy analysis and data manipulation. As researcher for ten years, she holds skills in data gathering and analysis through intensive fieldwork in tropical forests. Cécile is an alumnus of Imperial College, Environmental Resources Management Ltd., the United Nation’s Food and Agriculture UN-REDD+ team, and the Oxford Martin School.

Martin Harper – Executive Director in Global Conservation at the RSPB.  Martin leads the charity’s strategy for evidence, practical conservation and influence (in the UK, the 14 UK Overseas Territories and, working with the BirdLife International partnership, across the Africa-European flyway and globally where we can make a difference).  He is a member of Defra’s Biodiversity Programme Board and the BirdLife European and Central Asia Committee. Away from work, Martin enjoys family life with his wife and two children. Running keeps him sane, while Arsenal FC and the England cricket team provide him with emotional highs and lows.

The Delegation of the EU in London actively promotes EU interests & policies.

The Aspen Institute in the UK plans and hosts the EU delegation’s public diplomacy events in the UK.